Time flies! Especially if you're having a good time!

Even though the movie had been filmed before the release of Ace Ventura, by the time it premiered people knew who Jim Carrey was. The movie, which cost $23 million to make, was a box office success, raising $351 million worldwide!

If Ace Ventura showed how talented Jim Carrey was, "The Mask" cemented it.

Director Chuck Russell was the man in charge. He directed the movie based on the Dark House comic book, and was the one who decided to make a few changes, starting with the main character. Stanley Ipkiss and the Mask weren't as nice and fun as the movie shows, but when Jim Carrey got cast, Russell decided to make the horror story into a comedy. And he succeeded.

The music numbers were a direct choice the director only shared with the choreographer Jerry Evans, initially and Cameron Diaz wasn't the first choice to play Tina. 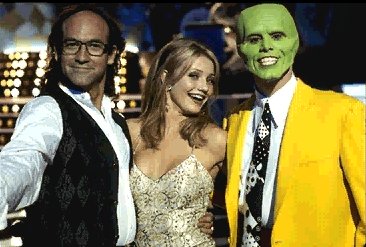 Russell wanted the late Anna Nicole Smith to play the leading lady. "But Russell says that though he was curious about Smith, she was not a choice "as I would have had to read her for the part to get that far. We met. Anna was charming and bubbly but did not have other qualities needed for the role. I never took the next step to run scenes with her."

Casting director Fern Champion found Cameron Diaz and she realized she had "instant likeability. She's a great girl. There were no barriers up. There was a brain behind her. She was just wide-eyed and blue-eyed, saying, 'Yeah, I want to act, Sure. What do I have to do?'" Champion said she and her modelling agent enrolled her in dance and acting lessons during the casting process.

Russell end up seeing a photo of Diaz at the casting desk and asked, 'What about her? I was told she was submitted but had not acted in anything else yet. I said to bring her in and let's see:" After the first reading the director was convinced: "She the only person for the part as far as I was concerned after her first reading. And then I saw the chemistry with her and Jim. Eight callbacks later, including improvs with Jim, I finally convinced producers."

The rest is history. People who have worked on the movie have a lot of positive things to say.

This movie made the world know who Jim Carrey was and made those two characters… unforgettable!